PARADOX is the elusive eighth toon from 2nd who I don't really like to acknowledge but he keeps showing up so I can't totally ignore him! 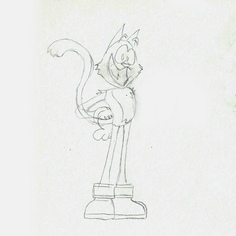 The original cast of 2nd were created in 2003 and were "Toonsketch" variants of older characters of mine that hadn't been used for a while.

I was having so much fun designing them I was eager to keep the ball rolling so about six months after the original seven cast members were created I thought about the possibility of adding an eighth.

I had a new character in the works - a cat called Paradox who could travel through dimensions and manipulate time and space. So new was this character that I never actually drew him! His position was quickly re-cast with L Firen Brimstone (a character not currently represented on this site) and Paradox jumped straight from concept to Toonsketch.

However, not even the toon version got a proper coloured profile (he was supposed to be blue) but the amorphous blob of silhouettes to the right there has one too many pairs of eyes because Paradox did in fact make it to a finished picture, albeit anonymously.

In the long run, being designed only six months after the rest doesn't seem out of place, but Paradox always felt like an afterthought to me, and Lucky Seven is a better number of players than Easily Divisible Eight. 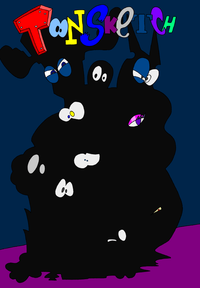 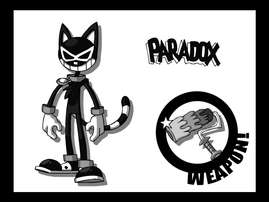 In 2010 when the cast got a new lick of paint fro some reason I decided to go back to Paradox too and see what else I could do with him.

It was here that he sort of got cast as the anti-toon, a more villainous character to play off the wacky hijinks of the rest.

So he becamse stark black and white and at one point I considered putting his hea on upside-down, reasoning there ought to be some odd sort of details that befits his name, but it didn't look right. It didn't even look wrong in a right way.

As this was where the rest of the team got their signature weapons, I equipped Paradox with a greayscale paint roller, the antithesis to that colourful one carried by "The Artist."

The gas would be that the Artist didn't remember ever drawing Paradox because he drew himself into existence.

At the time this image was published without explanation for the mystery but now I am revealing all the details here for your undoubted satisfaction!

2015 was when I nailed down all of the alternate variants of the character for the 2nd Trumps project, and while there was never any intention to include him in the final project, I did hypothesis one how Paradox was also fit into the various animation styles.

The theme for all of his appearances is that he would be a character who represents something that ruins their respective genres, such as:

CHILDSPLAY PARADOX is a scribble monster who brings darkness to the saccharine lands of pre-school animation.

BABY PARADOX is Brooklyn's cousin from out of town who arrives in the nursery and quickly elects herself as new leader of the babies.

CLASSIC PARADOX is an industrialist who wants to flatten all of the quanit vintage scenery to make was for modern manufacturing (I did consider having him bring colour to this world, but that's a bit too fourth-wall breaky and I don't think many people out there would claim that colourising cartoons made them worse.)

NOIR PARADOX is essentially The Great Gazoo. A sci-fi character who does belong in this genre and jusy magically makes things happen.

XTREME PARADOX never got drawn and I wasn't totally sure with what to do with him. If the Xtreme forms are based on the Loonatics concept art I suppose I have two options: Either make him one of those uncanny looking humans OR model him on the final designs for the Loonatics Unleashed, which were arguably more concerning than the original concepts.

ANIME PARADOX also never got a design and since I'm not too educated on anime I was at even more of a loss (at a less?) Maybe an obnoxious American tourist who has no respect for the culture? The entire concept of filler?

So for the Almost Twentieth Anniversary of 2nd I was hoping to redraw every single character, including all of the little sidekicks and support characters. I didn't manage to revisit all of Lunis's Horrorscope friends (I've really been flitting from one project to another very quickly this year) but I did include a new Paradox for the hell of it.

His simple black and white design was still fine, but I did manage to come up with an unusal head, manifesting here as two floating heads which split the feature among them.

I can't in good conscience say I dislike Paradox, but I don't think he should be part of the original team. Even though he's been around almost along as the rest, I've always hidden him from public view so to anybody who has followed my work for any length of time would see him as an incredibly late addition and frankly I don't think the team needs another character.

So Paradox exists in a kind-of-but-not-really paradox of his own, a non-member of the 2nd crew who will always be a part of their history but will never be a main character. 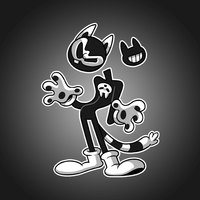