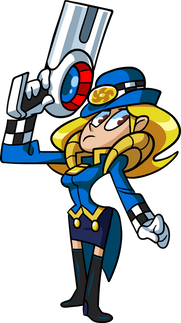 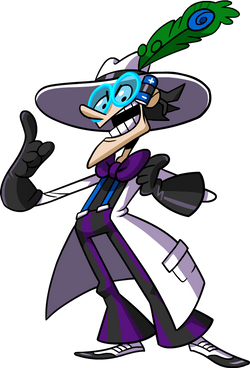 For many years this story was to be my epic - novels, cartoons, games, no media platform would be safe from my story of a mad scientist and the forces that would act against him.

I was a teenager who wanted things to be cool and dark and dramatic, but the comedy in my soul kept pushing harder and harder against it.

I never actually wrote anything and eventually came to my senses, realising that it should absolutely be more comical than serious and is probably best suited to a single type of media.

So eventually the idea developed into Space Lady Trousers, a concept for a run and gun game where the humour and characters are (hopefully) the focal point.

It stars Captain Callisto, high-ranking law enforcer of Cosmopol and her case to apprehend Professor Fandango,the super villain who has recently escaped from incarceration.

Overall the idea is quite derivative so it's taken a back seat to Mascot in recent years, but it still features plenty of madcap characters!

I love a character compendium so for this project it takes the form of the Encyclotrivia (so called because the planet this story takes place on is called Trivia) and includes full data files for characters, vehicles and locations, as well as all of Professor Fandango's novelty battle robots.

A hand picked selection of drawings from this project that will no doubt be updated and expanded upon in the future.