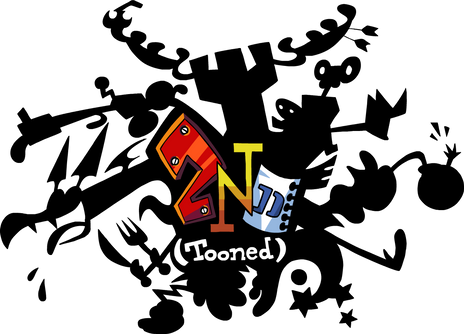 2nd was one of my flagship ideas some years ago.

It was a concept for a cartoon series featuring a set of wacky, over-the-top cartoon characters who interacted with the real world.

Initially this would involve live-action superimposition, but at some point even the "real world" was to be animated.

Ultimately, as time went on the concept became less and less unique (because other people had similar ideas to me!) and the project became stagnant.

However, I still have several short toon ideas with these characters and I think even the original idea could work as a short, fifteen minute film so I hope to return to this cast at some point in the future. 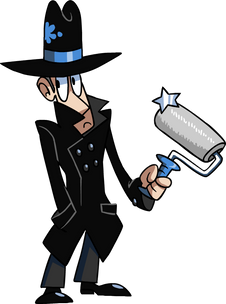 Since these are cartoon characters that exist in the real world, there needs to be somebody to bring them to life.

Because I am a horrendous narcissist, this is me.

When the plan was to use mixed media, I hoped to play this role myself (I do have some experience with acting, I'm not totally delusional!) Then when everything was going to be animated I substituted my colourful, over-the-top cartoon persona.

Later, I reasoned there was much more value in making this character less conspicuous, to serve as a foil for the wacky hijinx of the cartoon crew. Therefore a more introverted, colourless design was used (though still based on me, because this is the kind of thing I actually wear.)

The paint roller carried by the artist is the method by which the cartoons are "summoned" into the real world.

He sticks to the same seven characters, but they can theoretically be drawn with different features or outfits, though they can also change themself by way of their internal cartoon logic.

If a 'toon is destroyed in some humorous fashion, they can summoned again, rather than being permanently "alive".

The first member of the team is Lunis, the moon who posesses supernatrual abilities of telepathy and telekinesis.

This is betrayed by his highly cynical nature, insofar as he doesn't believe in the powers he uses regularly. 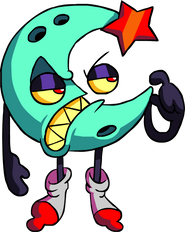 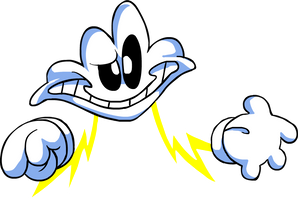 The cast of 2nd are supposed to be very cartoony and over-the-top, and the reason for that is that they are actually "cartoonified" versions of even older characters of mine.

The original Drizzle was a cloud monster who served as a villain to Blot, a simple blob character I made in 1994.

When I came to cartoonify him, I made his lightning arms much more simple and jagged, and notably topped them with some classic white gloves.

Drizzle is the smart one, prone to frequent "brainstorms," but this also makes him rather full of himself.

His weather powers include manifesting an entire refridgerator for snow, or burning a hole in himself with a magnifying glass for the "Ozone Laser".

The original Quartz was suppoed to be a "Guardian of Time" based on the kind of creatures found in RPGS, and would burst out of a large cuckoo clock.

It was a pretty silly concept to begin with, so the cartoon version wasn't much different.

Many years later I made the choice to integrate the cuckoo clock directly into his design and I think he's much better for it. 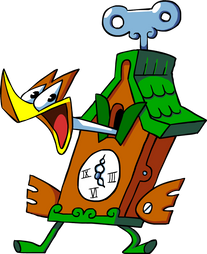 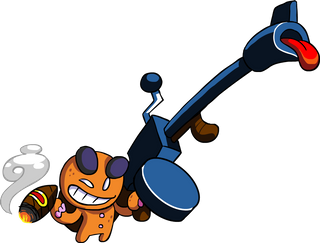 Crumbs is probably the best known of the 2nd crew and is a gingerbread man gangster.

Many years ago a friend of mine was explaining the game Timesplitters to me and mentioned that you could "play as the Gingerbread Man." What he failed to mention was that it was a human sized biscuit bloke, whereas I had pictured a tiny cookie fellow carrying around a proportionally huge gun.

When cartoonified, this became a massive bendy tommy gun with a tongue hanging out of the barrel.

The name comes from the fact that many gangster names are derived from body parts (Knuckles, Fingers, Face, etc.) but gingerbread men don't have those body parts, only crumbs.

He acts like a clichéd cartoon gangster, calling folk "wise guys" and chomping on a cigar.

Brooklyn is, in the context of the 2nd creation process, a very tragic character.

Her original form was that of a balding, big nosed man who bowled bombs like bowling balls. He was a villain in another project, "Bruce the Koala Bear." I use the term "project" loosely because I was very young and was trying to make my own computer game cast.

Unfortunately, not only can I not find the original drawing of him - it's probably long gone - but I can't even remember his name! So for years this lady was without a moniker, until I eventually just cut my losses and called her Brooklyn - an obscure bowling term.

There was an idea, very early on, that each member of the team would represent a different style of animation, so the very first picture of Brooklyn is very anime inspired.

This also accounts for her huge chest which was always meant to be funny rather than titillating, since it is so comically oversized. Of course, these were the early days of the internet and since then online artists have totally put me to shame in that regard. At the very least, the juxtaposition of her balloonish boobs against her incredibly tall, rail-thin physique should get the joke across.

She speaks with a New Zealand accent, is generally very jovial but as a sports player she gets very competitive. 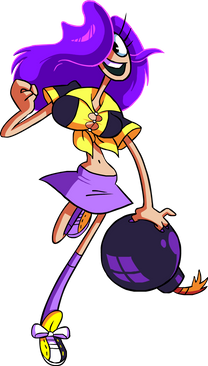 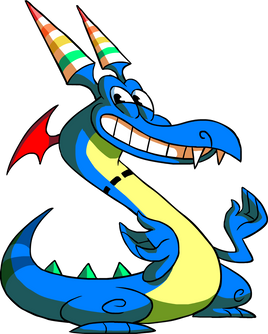 The original Zeppelin was the "Lord of the Skies," a legendary blue dragon with quite a small body and a huge wingspan, able to stay aloft indefinitely on the slightest of currents.

When it came to cartoonify him, I took the obvious route on giving him a big fat body with tiny wings that could never realistically carry him.

This got streamlined into a more serpentine shape later on.

He's an enthusiastic character who mostly follows his stomach. As a dragon (and, I suppose, a cartoon) he can eat anything without adverse effects and relishes the chance to do so whenever possible.

Several of his abilities involve him inflating his body (like a zeppelin, you see, I didn't know about the fetish when I designed him!)

The Flying Buttress of Vension

The only character who was based on a non-sentient design, the original Flying Buttress of Venison was a building, and one whose design didn't change much when cartoonified.

It was always a castle tower floating on a lump of earth with antlers and a rudder but its cartoon form gained eyes, so it could see where it was going.

The reason I had designed a Flying Buttress of Venison in the first place is a long, old, and most importantly boring story that I won't detail here but it was a fine addition to the cast.

Sort of. I decided not to give it a voice. It's also much larger than the other characters so sadly it doesn't have that much utility in a story.

The original (cartoon) Lunis had no limbs and I added them much later so he could actually contribute, maybe something more needs to be done with the Buttress?

Despite having no regular limbs, it can open many doors and hatches on itself to reveal mechanical arms carrying a huge variety of dangerous (and silly) weaponry.