Certainly I'm a huge fan of Mario and Kirby games and the like, and there is certainly a lot more of them to be invested in, but the fact that Parodius only has six games to its name means I can like the entire series without any weird outliers that I never played, or spin-off genres I wasn't interested in.

There is also some level of appreciation that comes from something being a bit obscure, a bit lesser known, perhaps so we can feel like we "own" it a bit more.

I also have a rather extensive collection of Parodius merchandise (the largest in the world, perhaps?) which is much easier when the entire series only lasted for six games over ten years in the 1990s so there is a very finite amount of stuff that one can collect.

I've drawn a lot of characters from this series and I'm going to do some more, so I'm giving it its own page.

This first set of images is quite old, but you might have seen them before because people like to take them and use them in YouTube thumbnails or t-shirt designs.

It's frustrating, but at least one person has told me they mistook my work for official artwork so maybe it's not as vindictive as I thought. 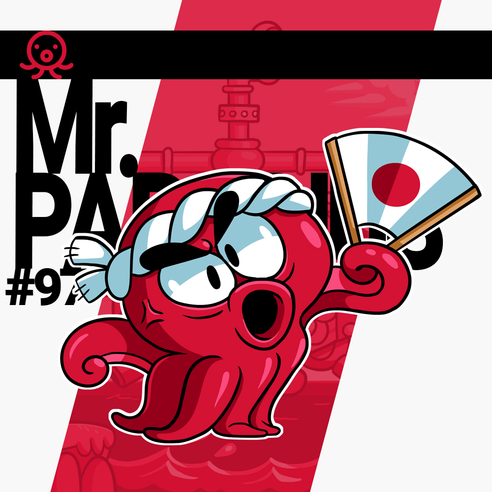 I said I'd never do another one of these, but then I did.

My reasoning was that there wasn't a character I was quite as invested in as a Smash Brother than Captain Syrup and that's quite true but as an entire series, Parodius is definitely up there.

You see, there is no singular character who appears all the way through the Parodius series. The first game revolved around an octopus simply called "Tako" (Japanese for octopus) and he maintained that role in the seuqel, but subsequent games started featuring Tako's descendants. There was always an octopus front and centre but it wasn't always the same one.

However this particular octo, now that we're twenty years in the future, is still pretty well recognised as the "mascot" of the series, so it does seem pretty appropriate for him to act as an envoy for the Parodius overall, and I've said before that Smash needs more quadrupeds, so how about and octoped!?

In Japan he is known as Tako, in England he is known as Octopus and in both he receives the nickname "Mr. Parodius" and I use all of those interchangeably throughout this moveset so try not to get confused.

The Parodius series, if you didn't already know, is a parody of the Gradius series of side scrolling space shooters so this character and everything around him is geared towards comedy. I like a comedy characters in Smash Bros. There are already a few and I think it's good to have a variety of character types - funny, cute, serious, cruel etc. but I'm all for another funny guy!

The colour variants offer the chance to feature all of the important octopodes throughout the Parodius series. This wouldn't be very practical in an actual game, since most of them are mainly red but considering characters like Pac-Man and Sonic generally maintain their signature colour between variants, perhaps slightly altering the shandes would be a suitable method around this.

2 - Tako as seen on boxart and in other promotional materials for Parodius! Why he had two such distinctly different designs is anybody's guess.

3 - Tako(suke?) as seen in Sexy Parodius. There is conflicting information about whether this is Mr. Parodius or Takosuke, but either way here he is.

4 - Takosuke from Fantastic Parodius. The first son of Mr. Parodius, this one is definitely Takosuke and takes over from his father as main character.

5 - Takohiko from Live Chatting Parodius. The second son of Mr. Parodius, who is searching for the Phantom Takoyaki (octopus eating octopus!?)

6 - Takosuke Jr. from Paro Wars, the oft overlooked spinoff to the Parodius series. Tako's grandson, we can presume.

7 - Belial, the second player octopus character in several games. She is apparently not related to the other octopodes but keeps showing up. Very mysterious!

8 - Tako as he appears in the instruction manual to Parodius (MSX). A throwback to his simple, original incarnation in the monochrome booklet. 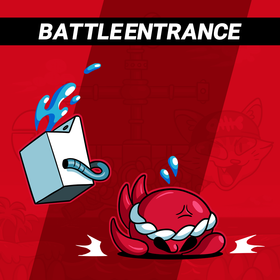 BATTLE ENTRANCE: If my sources are accurate the Japanese word for "select" is the same (or phoetically similar) to the word for "washing machine," so Parodius capitalised on this by use a washing machine as a selection cursor in a couple of its game menus.

The earliest example was the character select screen in the very first Parodius.

So I thought it would be funny for Tako to burst into battle by falling out of a washing machine! As a character who flies through space it would be tempting to just have him "touch down" but this is far more memorable and funny, and hopefully does a good job of representing the madcap antics of the series right from the get-go.

TAUNTS: I didn't mention taunts for Captain Syrup, but had a few ideas for this one.

The first is the little fan dance Tako does on the Parodius! title screen, the second has him simply fly in a circle, which focuses on his Options (see below) and finally waving the Octopus Country flag from Paro Wars, because I wanted to get another reference to that game in here somewhere.

With eight prehensile limbs, Mr. Parodius has a lot of scope for basic attacks, so many in fact that I won't be making any suggestions for them.

His smash attacks, however, I think could make use of the Japanese fans he is often pictured with. In Japanese comedy whacking somebody over the head with a paper fan is a classic comedy trope and since this is a comedy character (and the paper fan item was removed from Smash Bros) it's only appropriate for the octopus to incorporate it into his fighting style. 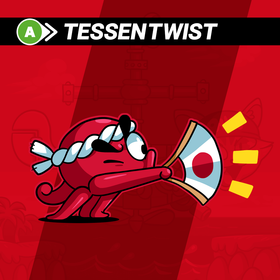 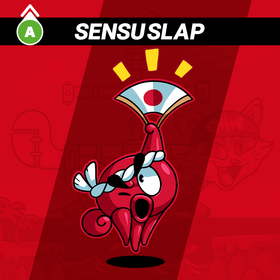 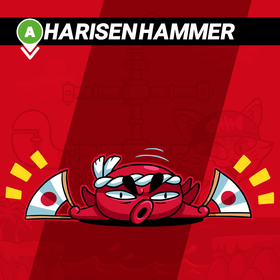 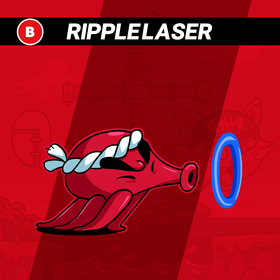 Every ship in Gradius/Parodius has access to a variety of weapons, and most of them have two bullet type upgrades.

The octopus characters have Tailgun and Ripple Laser.

I figured the latter was more apporpriate here since it suits the siphon type mouth well and I like the idea of its hitbox being at the top and the bottom, allowing opponents to jump right through it if they have good timing!

It would probably be fairly weak though, since it covers a large area and it can be powered up using a different ability (see below.)

Kirby copies this, of course, and in doing so gets the standard worker's headband, but I also threw in a fan for a little extra flair! 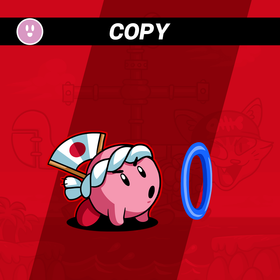 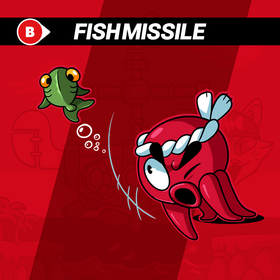 Along with bullet types, most type of ship also get a missile option.

Tako's are the 2-Way Missile, which take the form of a pair of fish being thrown in an upwards and downwards arc.

Since a downward projectile wouldn't be much use when standing, I have two versions here, a grounded version which throws one fish upwards and an air version which has both fish.

They would be more powerful than the laser, since they have a much shorter range, but not too powerful since they can also be boosted. 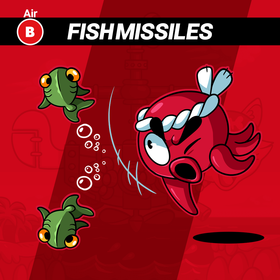 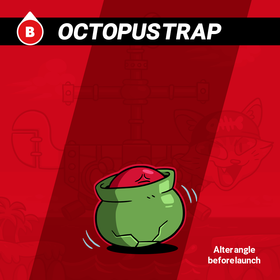 Japanese games love the imagery of octopodes being in or around pots and Mr. Parodius gets one as his shield option.

For this move he retreats into the pot, at which point you can alter your angle in any direction before he is launched out of it.

It's functionally quite similar to Piranha Plant's stretchy attack, but instead of snapping back into the pot. you remain where the "head" ends up. 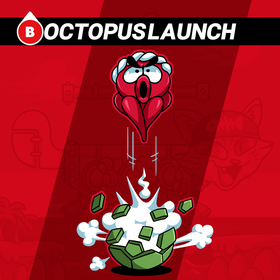 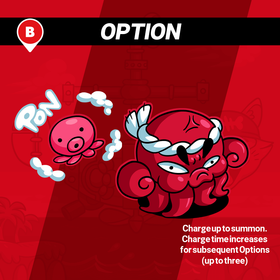 For a while I contemplated incorporating the power-up gauge into this moveset, but that originates from Gradius so it seemed a little disrespectful to use it in a Parodius moveset!

Either way I wanted to get Option ships into it somehow, and I think this is a way that works.

In shooting games, Option ships are small objects that follow your player ship and shoot whenever you do, mimicking your loadout and essentially multiplying your firepower by several times.

For this moveset Mr. Parodius can generate a smaller octopus Option that will follow him around and shoot Ripple Lasers and Fish Missiles whenever he does.

This is the reason those attacks aren't too powerful, since you're encouraged to multiply them as standard. 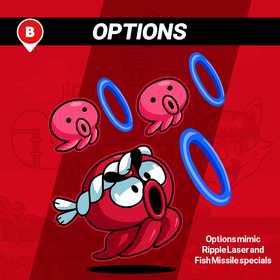 Of course, this might seem too powerful, and the instinct could be to make the Options disappear after a certain amount of time or after sustaining a certain amount of damage, but like the original games I want there to be an incentive to power up as quickly as possible, and I would prefer that the Options remain until a stock is lost.

My idea is that the button needs to be held down for a short time before the Option is summoned, then each subsequent Option requires a longer charge time. Therefore, the player must gauge whether it's worth spending the time charging in order to make themself stronger, while opening themself up to easy attacks.

As well as borrowing from Gradius, the Parodius series also included elements from Twinbee, specifically the bells which act a second type of power up, usually single use abilities or temporary transformations.

The white bell is well known throughout the series for equipping the player with the powerful megaphone, a weapon which overrides all of your usual attacks with huge shouted words that rip through all enemies!

These are of particular note for being nonsense phrases, some choice excerpts from the English version of the game being GET A STINKFOOT and SHAVING IS BORING!!

As a Final Smash, Tako simply generates a huge rectangular hitbox with his scream that launches anybdy that touches it. Maybe it works like Samus's Zero Laser by holding enemies in place to rack up damage before launching them, but it could just as easily be a one hit wonder that takes them out instantly.

Plus, as long as the hitbox is the same size each time, the words could change every now and again and we could knock people out to the tune of E=MC2 or the quadratic equation! 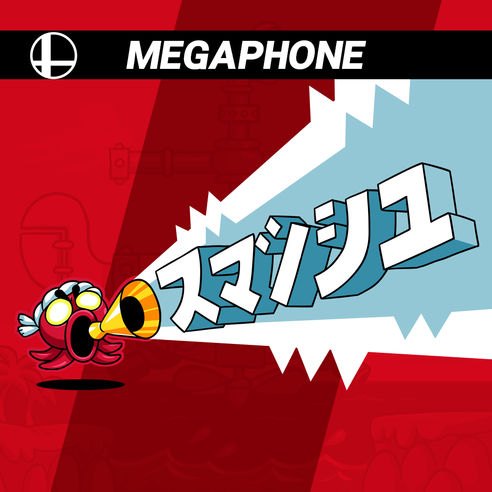 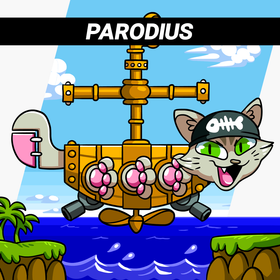 Since I included a stage in my Captain Syrup set, I decided to come up with one here too.

My first idea involved a platform being held up by Rika, the giant Las Vegas showgirl with her tilting it left and right while Moai missiles fly in and out of the battlefield.

In the end I realised that a travelling level would be perfect for Parodius, since the entire game is autoscrolling and it gives me the chance to include one of my favourite characters from the series, the Cat Battleship.

Unlike other travelling stages, the main platforms (the ship deck and mast crossbar) remain central and active all the time, with extra scenery scrolling in and out, including ceilings, extra platforms and moving obstacles.

I would probably have it travel through the Island of Pirates for a nice relaxing intro, then the Moai Battleship with the aforementioned missiles and the Disco Fortress, for an intense finale!

Back to Fan Art