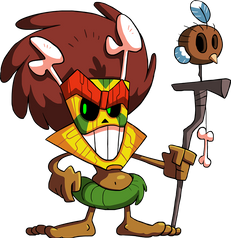 TANZ is one of my oldest characters, designed when I was about ten years old and has been a constant presence throughout my life as a person who draws pictures.

Every time I felt like I had attained a new level of artistic ability I'd make sure to do a new Tanz, his design contstantly evolving alongside my own skill.

This trend fell off a bit once I got a computer and was able to colour and complete my pictures digitally because I was also conceiving a cast of new characters (such as Professor Fandango and the 2nd crew) and they were becoming my new main focus, but every now and then I go back to Tanz and tweak him up a little bit.

The thing is...the design for this wicked witchdoctor did not spring out of my mind miraculously, it was "inspired" by a character I saw in a cartoon, and it was only when I looked that character up again this year (2022) did I realise just how inspiring it was. 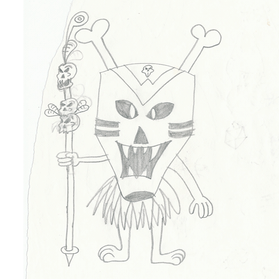 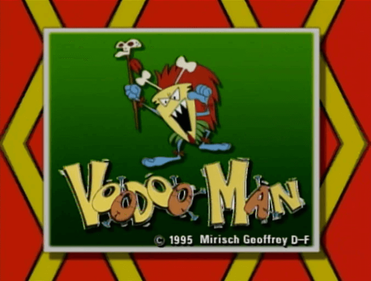 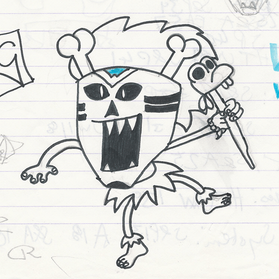 The Pink Panther was an American cartoon that ran from 1993 to 1995. It eventually made it over to the UK and as you can no doubt already see, it introduced a character who (to my knowledge) has not been seen in Pink Panther media before or since: Voodoo Man.

His influence on Tanz is pretty obvious, but the actual inception of my character does not originate here.

When I was in the final year of primary school we were treated to a tropical picnic of some sort, perhaps as a fond farewell and were given the creative brief of making a mask to wear for the event. The mask I made is that one on the left there, which I don't believe was inspired by Voodoo Man as you can see the details are not quite the same but when I came to paint it in exclusively flourescent paints I did make the main body of it yellow, which I think was inspired by the cartoon.

Proud of my new creation, I decided to turn the mask into a full character and this is where I started taking liberties.

I previously mentioned that "the details are not quite the same" on the mask design and you might assume that I had made changes to distance my design from Voodoo Man's, but I think it's worth thinking about how children learn to draw, especially if it becomes a major interest of theirs.

Young children have very little experience of the world and can only learn based on the things they're exposed to. This then has a direct impact on their imagination. Parents love to talk about kid's active imaginations, but they're almost always regurgitating and mixing together things they've already seen (not a criticism of your children, this is the only way it can really work!) The wacky scenario of a fire hose that spews rainbow paint is very much grounded in reality - a child will have learned about fire engines, paint and rainbows and smashed them together. 'Imaginative children' aren't coming up with completely new modes of transport or a colour that doesn't exist - they're just experimenting with what they've already seen and putting them together in new ways - learning!

So I'm defending myself for copying something as a child. Makes sense, I think most artists probably did the same thing while they were growing up - that's how we learn to draw or, indeed, do anything! Copy somebody else first.

What's funny about Tanz though is that the original version had some unique elements that were removed in a later iteration, as I leaned further into the Voodoo Man design by adding the hair, the near-identical wand and even the shaggy little anklets! But since I never used to colour my pictures in those days I didn't copy the blue skin. Perhaps because he was born from the mask, I always imagined him as having a more realistic skin tone. 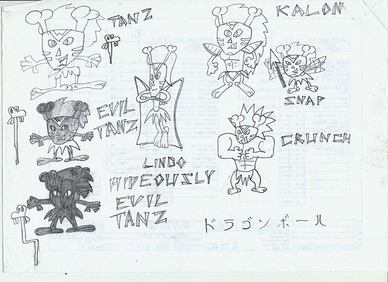 To implicate myself further, there was also a secondary cast of Tanz variants, each less original than the last.

If you're familiar with 1990's cartoons you might recognise the 'Evil' and 'Hideously Evil' counterparts as coming from The Ren & Stimpy Show, though that cartoon pays off the setup by revealing that the hideously evil silhouette is actually hiding a lady version of Ren.

As a young insecure man however I opted to retain the edgier solid black form for Tanz.

Before the cartoon had landed in the UK I saw a poster of it while on a foreign holiday and assumed (understandably, be fair) that they were alternate forms of the same character. Looking back it was probably Goku, Gohan, Vegeta and Gotenks but you have to admit they're pretty similar from a distance (you have to. I don't make the rules.)

Kalon's long hair and armour are the main takeaways, I think I was actually a bit more imaginative when putting together the other designs and Lingo became the main envoy of this group, showing up in my art as late as 2003.

The whole lot of them were scrapped shortly afterwards. 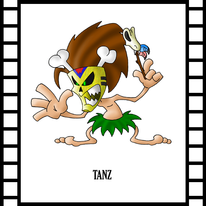 Over the years I refined Tanz's design, but only slightly. It was mainly the shape of the mask that got the most attention, perhaps because another trait shared between Tanz and Voodoo Man was that their face is the mask so I made it look more like a head (and since Tanz's mask is much smaller, it perhaps seemed more natural that way.

As I was also starting to run my pictures through this newfangled computer I was also able to start colouring him more conveniently. The mask retained the colours from its original real world inspiration but Tanz did start to differ from Voodoo Man a little bit here as I used more realistic colours, particularly in the skin which was not blue, but did get progressively darker over the years.

Despite this, the similarites are still obvious. The hair, the wand and in particular the two bones sticking out of the mask. Whenever I had tried to alter the design more significantly (such as when I experimented by replacing the hair with a plume of colourful feathers - a sketch that I can't find and was never coloured anyway but it didn't look good,) I still couldn't remove those bones. Without them Tanz didn't look like Tanz, but with them Tanz looked like Voodoo Man, because that's where I got them from!

Then it was a few more years before I returned to Tanz, and when I did (in 2015) I made a few more significant changes, as seen above.

This included a more compact body with tidier details and a more distinct mask, both in shape and detail. I was now drawing the wood grain on directly, instead of using Photoshop effects which were way too subtle.

I also totally replaced his skull wand with a more plain stick, but adorned it with a new character - a magical familiar of sorts - the Cuckoonut. 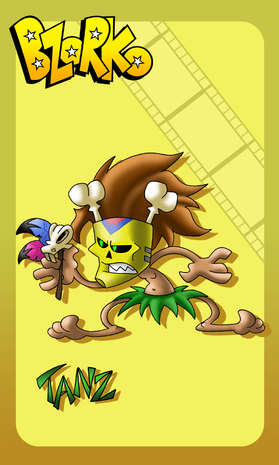 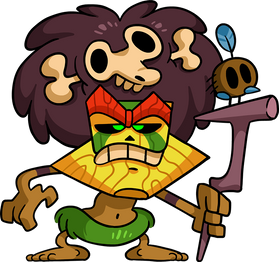 Some of these changes came about because I started putting together an animated cartoon starring Tanz (this was back in 2016 and I'm still sitting on a full animatic that I definitely think has the potential to be good, as long as I finally get back to it!)

I'd like to think that this shed Tanz of the last remnants of Voodoo Man, but those bones were still a concern. So in 2022 I gave it one more shot - the "hair" is subtly changed in style and is now a more burgundy colour and the bone antennae are replaced with a full skull (and an extra bone for old times sake.)

But what do you think? Have I evolved Tanz enough over the years so that he is barely recognieable as a Voodoo Man knockoff?

Is the resemblance still fairly obvious but stiff distinct enough that I can be forgiven? Or should I got back to the drawing board and start totally from scratch? I thought about that but wouldn't know where to start. If the character looks too different, it no longer looks like Tanz!

Maybe it doesn't matter, since I'll probably never market the character, but it's worth looking back to see where he came from and how my design philosophies - and imagination - have changed over all these years. 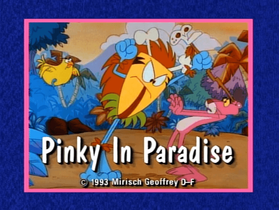